If you were to ask people why they’re interested in applying data science in clean technology - the chances are that you’ll come across three answers. 1) They want to make a difference to the planet and help people 2) They think it’s cool technology and want to be at the forefront of innovation and 3) They’ve heard it’s a hot and upcoming field with lots of jobs and opportunities and want to get in at the ground level.

Now, one and two are both pretty obvious - but what about the third reason? Is the intersection of clean technology and data science really such a growing field?

As it turns out, the estimates held up pretty well.

Clean technology can be divided into twelve main sectors based on the function and Earth system being evaluated. The sectors are shown in the figure below. 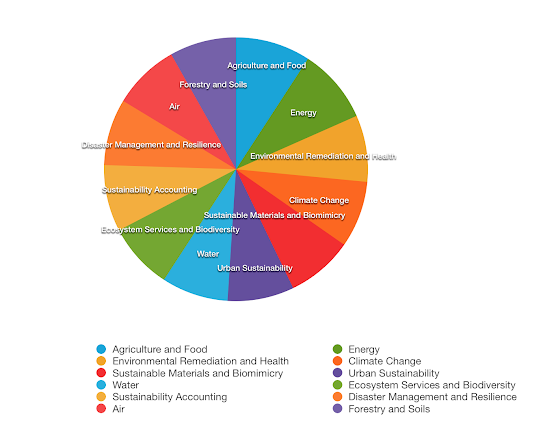 About five years ago, the energy sector was taking off - with renewable energy becoming a major component of energy generation and electric vehicles, including Tesla, just coming into their own. So, the forecast was that this sector would continue to grow - but with increased focus on energy efficiency and buildings. We’ve definitely seen the energy sector grow with the data science aspects becoming more and more important. The combined data science and energy sector is now forecast to reach a global market size of $172 billion by 2025 at an annualized growth rate of 14.5%.  So, a pretty significant market!

Other data science and clean tech sectors that are expected to grow significantly by 2025 are data science in agriculture, water, climate tech, air, forestry and smart cities. They are all forecast to reach between $6 billion to $22 billion globally, at annualized growth rates between 10% to 25%, respectively. Agriculture and water are the main sectors - as was predicted five years ago.

The biggest surprise compared to earlier predictions is the growth of data science in smart cities. That market is now forecast to range between $200 billion to $900 billion by 2025! That makes it the largest growth sector now in the data science and clean tech market.

So, if we put all this together, the global market for data science in clean technology is at least $500 billion by 2025 and likely to reach $1 trillion. That means that the forecasts of multi-billion dollar markets are already coming true and we’re definitely headed to the multi-trillion market space.

That makes it a very attractive prospect for companies, organizations and people wanting to make a career in this field. However, one of the challenges that was highlighted in all these market analyses and forecasts, was the lack of professionals who were trained in both the clean technology sector in question and data science. That means that folks who are willing who put in the effort to become expert in the combination of skills are going to be in great demand - now and in the future!