Agtech, Farmtech, Foodtech, Livestock tech - the market for agriculture and data science over the last decade

It’s always interesting to take a look at how trends and predictions about new technologies and their ramifications for different sectors pan out. And that’s no different when it come to data science and clean technology.

A graph that often comes up when discussing how new technologies develop is the “Gartner cycle of hype”. This is the idea that all new ideas, concepts and technologies invariably go through several stages in their development - they all start with excitement as the promise of new technology opens up possibilities that seem limitless, followed by a crash course in reality when what’s actually possible collides with dreams, and finally a steady look at immediate solutions that can build towards the dream. The last stage is when startups gain traction or are acquired and larger companies start building teams to work with the new technology. 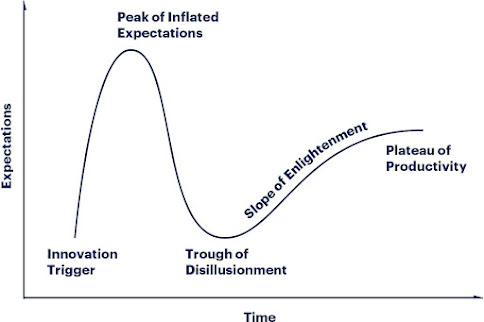 So, how has agriculture and data science - or AgTech worked out?

It’s definitely been an interesting ride since the concept came out about 10 years ago! Of course, using machine learning and remote sensing for agriculture was being researched in the laboratory and in pilot studies by scientists and precision agricultural systems were being deployed by several companies. What changed about 10 years ago was the entry of several of these technologies into commercial systems at a much larger scale than previously possible. And that was mainly due to the rise of cloud computing, inexpensive data storage, widely available and inexpensive satellite imagery.

The first wave of companies, including companies like Climate Corporation, launched about 12-15 years ago. These startups were looking for ways to improve agriculture using these new technologies - and their initial products ranged from crop insurance, yield prediction, better weed control - all sorts of web-based products. These offerings were typically desktop based products, and while they were beginning to use the new data science tools - these were still very much in their infancy.

Then came the first launch of Amazon Web Services (AWS) in 2006, the first iPhone in 2007 and the first iPad in 2010. As regular people, including farmers, got used to having information at their fingertips and being able to control and access different systems using apps - things changed for the agtech sector. Companies started developing sophisticated tools for farms where what was happening to the farm could be seen in beautifully generated maps or images. That combined with new research on building models using all the available satellite and sensor data made it possible to generate predictions that were available sooner and were more accurate than existing models and systems.

That in turn led to greater investment in the Agtech sector from venture firms, more acquisitions as larger companies started seeing the potential of these technologies and more and better technology - as you can see from the figure below. 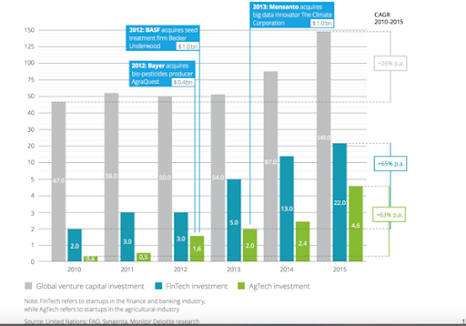 Source : From Agriculture to Agtech, Deloitte, 2016

In fact, the Agtech sector is now predicted to achieve a market size of at least $22 billion globally in the next 5 years, and it shows no sign of slowing down. As the sector has grown, it’s become divided into additional categories - farm tech for what’s happening on outdoor farms, food tech for what’s happening in the food production sector, agtech for things like containerized farming, vertical farming, robots and sensors and even livestock tech for sensors and models for cattle, pigs, hens and other farm animals.

If you’re interested in learning more about the market, companies, jobs and skills at the intersection of data science and agriculture, join us on Friday October 9th at 12 noon Pacific Time for a free webinar on the topic.