Several interesting research studies have been written highlighting how data science is being embedded in clean tech. What I find fascinating is that these stories showcase research at very different scales – at the micro level and at the scale of the Earth System.

The first study that came out this week was by teams from the University of California, Irvine and NASA’s Jet Propulsion Laboratory evaluating the melting of Antarctica’s glaciers. The teams used satellite data to monitor the location and movement over the years of the glaciers “grounding line” – the point at which the glacier begins to float while still attached to the land. The reason that’s important is because it helps determine how much ice is melting into the oceans – with all the associated implications for understanding sea level rise in a changing climate. The recent data (2014-2016) came from the Sentinel-1 mission launched by the European Space Agency and the previous years data (1992,1996 and 2011) that was used for comparison from the Earth Remote Sensing Satellites (ERS-1 and ERS-2).

Satellite data has been used for a very long time by scientists to monitor different systems on the Earth – it’s a classic example of how data science is being used in clean technology. The process by which the satellite data is used is quite detailed – the scientists need to figure out which satellite has the right sensors to monitor the system they are looking for, which band does the data exist in or in other words, how does satellite “see” the system, do different bands need to be combined, how often are the data collected, how can differences in cloud cover and other errors be compensated for and finally, how can the data be downloaded and used in answering the questions they want to study. 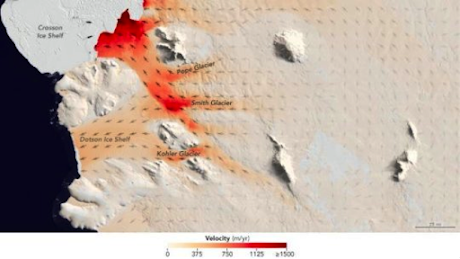 The scientists studying the Antarctic glaciers have said that Sentinel-1 has sensors that allow them to study ice sheets in great detail compared to some of the other satellites – which is why they could do the analysis they wanted. The results from their study showed that the glaciers are melting far faster than was previously thought – and that could mean that the projections of how much the sea level will rise as the climate changes are much higher than expected.

The second set of studies that came out looked at embedding sensors in very different ecosystems – in one case to collect data more efficiently and in the other case to use the organism as a detection/ early – warning system. These are examples of the applications using data science that are being built these days as sensors are getting cheaper, data can be accessed through the cloud and there are all the DIY kits that allow for customization for specific problems.

In the first case, scientists at Northeastern University built artificial mussels that they embedded into the ocean bed (See article). These artificial or “robo-mussels” collected data ocean temperatures over several years (1998- present) – the scientists downloaded the data and analyzed it to understand how the ocean temperatures were influencing species behavior and ecosystem changes. In the second study, scientists at MIT inserted carbon nanotubes into spinach plants that enabled them to detect explosives – essentially using the plants as sensors (See article). In this case, the embedded sensors emits a signal that is read using an infrared camera connected to a Rasberry Pi, a $35 credit-card sized computer that is similar to the ones used in smart phones.

All of these studies really showcase the degree to which data science is being used in clean tech today – sometimes, just because you haven’t heard about it in those terms doesn’t mean that there isn’t a lot of detailed computational heavy lifting going on behind the scenes in environmental work!