Careers in Clean Technology and Data Science: An overview

We’ll be doing a series of posts discussing careers at the intersection of data science and clean technology - what kind of jobs are there, what career paths do they lead to, where can you work and what are typical salaries in this field.

The market for clean technology and data science is still in its infancy, but growing rapidly. The market is divided between several sectors (energy, agriculture, water, climate change) to name a few and each of these sectors has a market size ranging from multi-million to several trillion dollars. As data science, including the use of sensors, machine learning, imagery and statistics, penetrates each sector, the market for clean technology and data science becomes correspondingly large. In fact, it’s been estimated that we could be looking at a market size between 100 billion to 6 trillion dollars worldwide by 2025. To put that in perspective, the software industry in the US has a market size of close to $2 trillion dollars today and ~$5 trillion worldwide. We're looking at something that is at least as big and poised to be even larger in the future. That's a lot of jobs, startups and technological advances!

So, what kind of careers are possible in this field? Now, that really depends on the kind of organization you want to work in, what you would like to do and your skills. 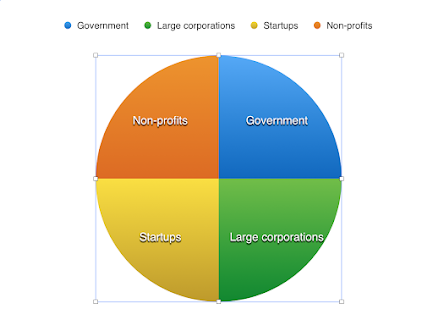 Government organizations can be international (the World Bank, the IMF, the United Nations Environmental Program for example), national (NASA, NOAA and the EPA in the US for example), state agencies (the California water and air resources board, state agricultural departments, state environmental agencies for example) or local (cities, regional water and climate agencies for example). As data science becomes increasingly important, these organizations are looking for people who have expertise in the required clean technology domain (urban planning/transportation for cities for example) and an ability to see how data science can be used to solve problems in these domains. Roles in these organizations can range from traditional research and engineering positions (a data/software engineer in a city or a research scientist in NASA) to management roles (a program manager in a federal funding agency like NSF, a manager in a water agency) to leadership and C-suite positions (Chief Information Officer for the City of Palo Alto in California for example, or Chief Data Scientist for the US)

At the opposite end of governmental organizations, we have the startup world. We’ve been seeing increased interest from both large companies and venture capital funds over the last 5 years in funding clean tech and data science companies. The sectors that have received the most funding so far have been energy and agriculture. But, we’re seeing more interest in water, climate change and disaster management over the last year as well. Startup companies can range from companies that are a few people and just starting their seed round to companies that have been funded for several years and are between a few hundred to several thousand people. In the initial stages, startups are typically looking for engineers and scientists to do the actual work of building the algorithms and making the product. As the startups scale and grow, management positions open up and then you start seeing positions at the manager level or higher - a “Director of Data Science” role for example.

And then, there are large corporations and the structure that is associated with them. In the last few years, we’ve seen several large corporations acquire startups that are operating in the clean technology and data science space. In agriculture for example, robotics and imaging startup Blue River Technology was acquired by John Deere and earlier, data science and crop  yield forecasting startup Climate Corporation was acquired by Monsanto. In the energy space as well, we’ve seen Oracle acquire Opower- an interesting acquisition where Opower’s energy efficiency analytics service for utilities is expected to be integrated with Oracle’s cloud and software platform to enable power companies to meet their goals of energy production and customer engagement. In other sectors, insurance companies are interested in climate modeling to mitigate risk; and water utilities are looking to data science to improve conservation and customer engagement.

Of course, working in large companies, whether they’ve acquired startups or are building their own teams internally, means that there are several roles and careers that are possible for people interested in working in clean technology and data science. There are the traditional engineering and research roles (Data scientist, data engineer, remote sensing scientist, computer vision expert, robotics engineer……and so on), management positions leading up the chain (team lead, product/program managers, directors, vice presidents) and all the way up to the C-suite where Chief Data Scientist/Chief Data Officer (CDO) is now a position that is equivalent to the Chief Technology Officer (CTO) in many companies.

Finally, there’s the non-profit sector. This is probably the sector that is fairly unique in the clean tech and data science space because there’s a lot of interesting, innovative work in this space that is being conducted by non-profits. Examples are organizations like Nature Conservancy which is looking at remote sensing data to manage poaching and reforestation, the Moore foundation where program managers are building programs to aid in climate change mitigation by using data science. Roles in these organizations can range from being a scientist or engineer to a manager to leading the data science initiative in the organization.