How Big is the Clean Tech and Data Science Market?

This month we'll be talking about the market for Ecoinformatics or the intersection between Clean Tech and Data Science! To start with, let's look at some numbers for each sector independently. The clean technology market size has been variously estimated at between 2 and 6 trillion dollars over the last decade. A recent study published by the World Bank showed that the market size in 2012 was estimated at approximately $5.5 trillion. The main sectors are shown below (by percentage). 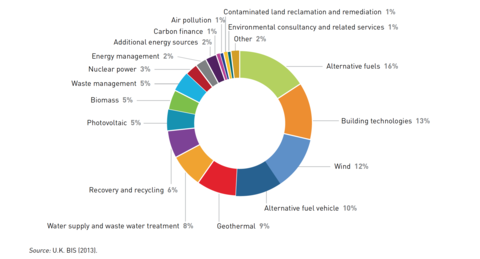 In short, energy (solar, wind, energy efficiency, alternative fuels), agriculture and water make up the largest part of the clean tech scene with energy being the dominant player at this time. Each of these sectors is a multi-billion dollar sector in itself, so it isn't hard to see that data science use cases for each of these sectors will also constitute a multi-million dollar market at the least, if not more.

The market size for data science is harder to estimate since it can cover a wide range of industries and sectors. Some technologists believe that every industry will depend on data science - would mean a multi-trillion dollar market. Others, like the consulting firm IDC, more conservatively estimate it between $49 billion to $187 billion.

The question of course, is how exactly do you define the data science market? Do you include hardware (which would mean chips, sensors, satellites and robots), the software aspects or the data engineering part (databases, security, data pipelines), algorithms (machine learning, statistics) as individual sectors that get linked to solve particular problems or do you treat it as a whole system where all the different sectors need to be included? When we look at how much artificial intelligence, machine learning, sensors and data have penetrated different industries already all over the world , it seems realistic to do an "all of the above" to the different sectors detailed here - which means that we are looking at multi-trillion dollar markets.

The interesting question is how big is the market for the intersection between the two technologies?

Let's start by picking the dominant clean tech sectors today and looking at how data science would be used in them. The expected growth in the main sectors in shown below. 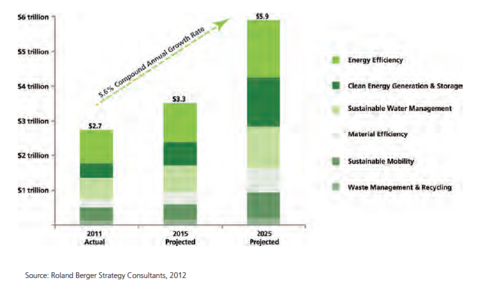 Today, the clean tech sector is poised to double in the next ten years, just focusing on the energy, agriculture, water and smart cities sectors which are projected to reach close to $6 trillion by 2025. In each of these sectors, we are already seeing extensive use of sensors,robots, satellites to collect large amounts of data and different ways in which the data are used to solve problems. For example, there's water conservation messaging by utilities in cities to save water by developing comparison algorithms between different users; crop harvesting and yield prediction in agriculture through sensors, robots and satellite imagery; energy production and feeding into the grid as well as decentralized options; electric cars and sustainable transportation..... and so on and so on.

We'll continue this series by looking at an example of a small market in the clean tech field as well as an analysis of startups in this sector... stay tuned.