An example marketplace: The Multi-Billion Dollar Investment Market for Conservation

Here we’re going to take a look at one of the smaller sectors in clean tech and look at how data science is making a huge impact. This is just an example of how the market is likely to evolve for the ecoinformatics sector.

The environment has often been seen as nothing more than an unlimited source of materials that are then turned into useful products that human beings can use. While this viewpoint was challenged in the latter half of the 20thcentury, there still remains a sense that the environment is more of an after thought for business rather than something that has value and contributes to a business.

So it’s really interesting, especially in our current climate, to see how investing in conservation and ecosystems has performed. The Ecosystem Marketplace  put out a report showing that private investment in conservation has topped $8 billion globally in 2016 and that investors are expecting a rate of return of at least 5% and in some cases of 10% and more. Compare that to the anemic returns that are being seen in traditional investment vehicles these days!  These investments were defined as investments in sustainable food and fibre production, habitat conservation and water quality and quantity conservation and were expected to return the original investment amount and a profit. In other words, these were not grants or philanthropic toys – but genuine companies and funds that were looking to build a green future.

Not just that, but investment climbed 62% in two years, growing from $5 billion in 2013 to $8 billion in 2015. And the report claims that there is still $3 billion left on the table – because investors could not find enough investments. Capital has been distributed throughout the world, with North America leading in the amount invested.

In the case of the United States, this dramatic growth in the markets can be easily visualized on a map. 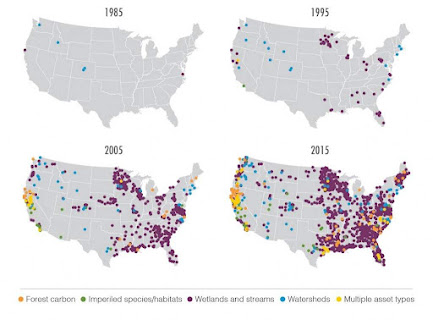 This map was generated with the help of the EPA’s EnviroAtlas tool and presents a powerful visual of how markets have increased over the last 20 years – compare the numbers presented in text with the map and you can see the spread of the markets over time and space.

So where does data science fit into this picture? First, there is a significant amount of data gathering, mapping and visualization involved in determining where to invest, the amount to invest and expected returns. Additionally, network optimization, graph theory and machine learning can all be used to follow supply chains and ensure that the money is being invested in the best possible manner. Finally, presenting the information to fund managers, CEOs and other executives is best done with maps, dashboards and other data visualization tools.